The King Beetle on a Coconut Estate

from It's All Crazy! It's All False! It's All a Dream! It's Alright by mewithoutYou 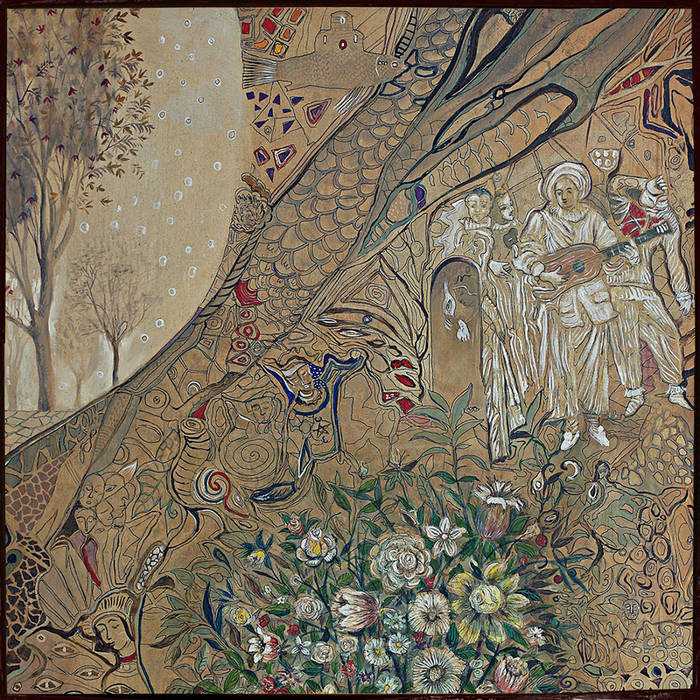 As the Moon rose and the hour grew late, the day help on a Coconut estate raked up the dry leaves that fell dead from the Trees, which they burned in a pile by the lake.
The Beetle King summoned his men, and from the top of the Rhododendron stem: Calling all volunteers who can carry back here, the Great Mystery's been lit once again.
One Beetle emerged from the crowd in a fashionable abdomen shroud, said: I'm a Professor, you see, that's no mystery to me...
I'll be back soon, successful and proud.
But when the Beetle Professor returned he crawled on all six, as his wings had been burned, and described to the finest detail all he'd learned.
There was neither a light nor a heat in his words.
The deeply dissatisfied King climbed the same stem to announce the same thing, but in his second appeal sought to sweeten the deal with a silver Padparadscha ring.
The Lieutenant stepped out from the line as he lassoed his thorax with twine, thinking: I'm stronger and braver and I'll earn the King's favor.
One day all he has will be mine!
But for all the Lieutenant's conceit he, too, returned singed and admitting defeat: I had no choice, please believe, but retreat...
It was bright as the sun, but with ten times the heat!
And it cracked like the thunder and bloodshot my eyes, though smothered with sticks it advanced undeterred.
Carelessly cast an ash cloud to the sky, my Lord, like a flock of dark, vanishing birds.

The Beetle King slammed down his fist: Your flowery description's no better than his!
We sent for the Great Light and you bring us this?
We didn't ask what it seems like, we asked what it IS!
His Majesty's hour at last has drawn nigh!
The elegant Queen took her leave from his side, without understanding but without asking why, gathered their Kids to come bid their goodbyes.
And the father explained: You've been somewhat deceived...
We've all called me your dad, but your True Dad's not me.
I lay next to your mom and your forms were conceived, your Father is the Light within all that you see.
He fills up the ponds as He empties the clouds, holds without hands and He speaks without sounds, provides us with the Cow's waste and coconuts to eat, giving one that nice salt-taste and the other a sweet.
Sends the black carriage the day Death shows its face, thinning our numbers with Kindness and Grace.
And just as a Flower and its Fragrance are one so must each of you and your Father become.
Now distribute my scepter, my crown and my throne and all we've known as 'wealth' to the poor and alone...
Without further hesitation, without looking back home, the King flew headlong into the blazing unknown!
And as the Smoke King curled higher and higher, the troops, flying loops 'round the telephone wires, they said: Our Beloved's not dead, but His Highness instead has been utterly changed into Fire!!!

Why not be utterly changed into Fire?...

Bandcamp Daily  your guide to the world of Bandcamp

New sounds from Mavi, Ivy Sole & Moderator, plus AJ, the One joins the show, for her latest release